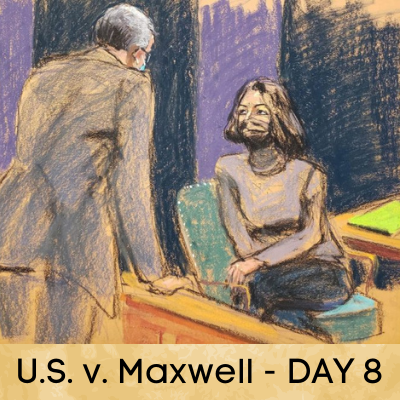 Day 8, starting late due to juror with slow MTA subway, day after US announced it will or may rest its case this week

Judge Nathan: We still have to wait for our juror who has substantial train issues. I'll step down off the bench.

Next witness: Janine Gill-Velez of Florida Property Management (that is, Mar-a-Lago).

Assistant US Attorney: How long have you worked at Mar-A-Lago?

AUSA: So this is exhibit 823-r, redacted [for the public]. It's a personal action notice, the hiring of Sky Roberts in April 2000.

[That is what the US wanted to establish, the hiring of Sky Roberts. So now, cross-exam]

Maxwell's lawyer Bobbi Sternheim: But you have no personal knowledge of the hiring, correct?

Judge Nathan: This witness will testify only as Shawn, to protect anonymity of previous witness [Carolyn]. No exact likeness in drawing.

Witness: I'm S-H-A-W-N. That sealed exhibit has my full name.

AUSA: How old are you?

AUSA: What was the first name of your girlfriend?

Shawn: Carolyn. She was 14, I was 17. We dated four or five years. She worked at Arby's, and she worked for Jeffrey Epstein.

AUSA: How did she meet Epstein?

AUSA Maurene Comey: Did you go to Palm Beach much?

Shawn: No. I didn't have enough money to buy anything in the gas station there

AUSA: How long did Carolyn stay in Jeffrey's house?

Shawn: An hour. Or an hour and five minutes.

AUSA: How were the session set up?

Shawn: They would call my phone: Sarah and a lady with a foreign accent. One was English and one almost French.

AUSA Comey: Did Carolyn mention anyone else?

AUSA: Did she get a gift?

Shawn: From FedEx. Lingerie and a movie. From New York.

AUSA: Did you go to Epstein's with anyone else?

AUSA: How old was Amanda when you saw her go to Epstein's house?

AUSA: How old was Melissa when she went to Epstein's house?

Shawn: 16. She came out with hundred dollar bills.

AUSA: Were you arrested in Louisiana?

Pagliuca: And it was Sarah who called you and gave you her name, right?

Pagliuca: You met the government, for example in July 2022, and said the accent was French.

Shawn: It was foreign.

Next witness: Nicole Hesse, worked at Epstein's and Maxwell's Palm Beach home in 2003.

AUSA Moe: What was your job?

Mrs. Hesse: Take care of the home. I was hired by Ghislaine Maxwell.

Judge Nathan: I'll give the jurors their morning break.

Jury finally back & US introduced exhibits - under seal.

AUSA: In this sealed exhibit, do you see that Carolyn called Epstein's house?

Rogers: Jeffrey Epstein. As a pilot, since 1999. I was hired in Columbus, Ohio.

Rogers: We mostly flew between his houses. From 1991 he had a smaller plane, then a Gulfstream. Then a Cesna 421 followed by the Boeing 727...

AUSA: On the Gulfstream, what divider was there?

Rogers: I kept a log book. Including passenger names.

AUSA: We offer the log book - as a sealed exhibit.

NOTE: Rogers' log book, as shown on the screen, has the entire column of passenger named redacted or blacked out.

Press question: Is there really a reasonable expectation of privacy for flying on the private jet of a pedophile?

AUSA: How did you find out the names of the passengers?

AUSA: Would you always know?

Rogers: We were flying to Traverse City, Michigan.

OK - jury's set to come back in, Ghislaine Maxwell in red sweater siddled over to whisper in lawyer's ear

FINALLY, jury back in their chairs.

AUSA: Mr. Rogers, please turn in your binder to GX 12. Without saying the name out loud, is that the name of a passenger on Mr. Epstein's plane?

AUSA: And this flight?

Rogers: From Palm Beach to New Jersey. Jane was on the flight. By first name.

AUSA: Are there others on the flight?

AUSA: Let's move to another flight. [Who else was on not disclosed, nor asked on direct]

Rogers: Van Nuys CA to Santa Fe NM, only Jeffrey on the flight.

AUSA: How many times do you remember Virginia Roberts flying on Jeffrey Epstein's planes?

AUSA: And was there one other person on the flight?

AUSA: Let's move to another flight [The additional passenger UNdisclosed]

AUSA: And this flight?

Rogers: From Spain to Tangier, Morocco. [Epstein and Maxwell on the flight]

Maxwell's lawyer: Sometimes the cockpit door would be open and you could see the passengers, right?

Maxwell's lawyer: And you did that sometimes, yes?

Maxwell's lawyer: You never found in the cabin any sex toys or used condoms, right?

Rogers: No I did not.

Maxwell's lawyer: Isn't it common to own private planes through companies, one company per plane to limit liability, right?

Judge Nathan: Let's take our mid afternoon break. [What is being accomplished by this cross examination

They're back, with Maxwell's lawyer Everdell still flaying around on cross examination.

Everdell: Mr. Rogers, you know the real name of Jane, don't you?

Judge Nathan: Without saying it.

Everdell: But Epstein had an assistant with the same first name as Jane's real first name, didn't he?

Rogers: Yes. [Note: This is another way of outing or doxing]

Everdell: And Eva Dubin was on this flight, and her husband is a hedge fund manager who was an Epstein client?

Everdell: So these trips to Columbus, Ohio, that's where Leslie Wexner lives, right, the owner of The Limited?

Everdell: And Mr. Wexner is a billionaire, Jeffrey Epstein's client?

Everdell: And you never saw Annie Farmer in your planes, or your logs?

Rogers: I did not.

Everdell (after a time) I thought it was later than it is.

Now at the end, more on scheduling.

Judge Nathan: I would prefer to not do the charging conference Friday (in 9 days) in case you don't have a case going that day... Given the expedition of the Government's case, maybe we can use Friday for charging.

Judge Nathan: I'm comfortable letting the defense begin its case on Thursday (in 8 days). The result may be that the jury has (this) Friday off as well.