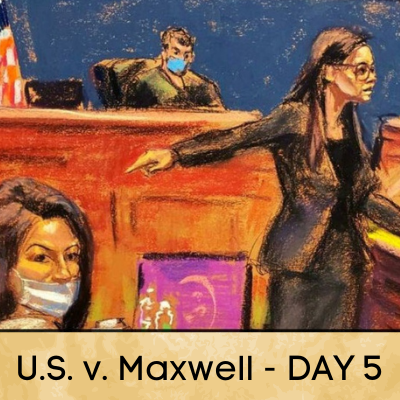 Maxwell's lawyer (before jury comes in) Seeing semen on the table is going to be prejudicial.

AUSA: It was a white stain. It is entirely probative as to whether these massages were just messages or were in fact sexual.

Assistant US Attorney: The fact that Mr. Epstein had a collection of schoolgirl uniforms is relevant.

Maxwell's lawyer: This has little connection Ms. Maxwell and is prejudicial.

AUSA: School girl costumes, small ones, were found in the massage room.

Maxwell's lawyer: They should not be described as schoolgirl uniforms.

AUSA: I'll just lay a foundation then ask the witness about them.

Judge Nathan: You could say, without describing them, did you find these items.

Maxwell's lawyer: The interior and artwork changed, by 2019. The witness we call "Jane" said it was creepy, with drawing of monsters on the walls and naked women. We think these photos should be excluded. The photos of nude girls in the massage room

Judge Nathan: Maybe there's a way to position two screens, and only show them to the jurors. I'll ask Ms. Williams to ask the A/V people. Can show video so that only the jurors can see it, and no one else? We'll see.

Please bring in the jurors.

Judge Nathan: Mr. Alessi, you may return to the stand.

Maxwell's lawyer: Mr. Alessi, you said you are called Juan but don't you sometimes say, "I am John"?

Alessi: I am John, in English.

Maxwell's lawyer: Ms. Maxwell speaks Spanish and called you Juan. You did not take it as an insult, no?

Maxwell's lawyer: But didn't you lie - when you stole twice, in fact?

Alessi: I did not lie.

Maxwell's lawyer: Didn't you try to steal a gun? Didn't you steal over $5000 to pay for the immigration papers of your girlfriend?

Alessi: It was not my girlfriend.

Maxwell's lawyer: You told him you went in to steal a gun.

Maxwell's lawyer: You might have said it, but now you don't recall?

Maxwell's lawyer: & you went back once again to steal money?

Alessi: I did it one time & I think that is what I told the police.

Maxwell's lawyer: You went through the sliding glass door and stole $5600 from Mr. Epstein's briefcase, $100 bills in a white envelope?

Maxwell's lawyer: Show the witness 3504-002, deposition transcript. I move for admission under Rule 801.

[Note: "(A) is inconsistent with the declarant’s testimony & was given under penalty of perjury at a trial, hearing, or other proceeding or in a deposition;"]

Maxwell's lawyer: You stole $6000, when you owned properties valued at $1 million.

Alessi: I sold those properties, to buy the property for the multi-family.

[Note: During all this, Ghislaine Maxwell is leaning back and even masked, seems pleased with herself..]

ALERT: Maxwell's lawyer has just openly said the real name of one of the pseudonymous survivor witnesses.

Judge Nathan: You are admonished to abide by my rulings.

AUSA: May we approach?

Returning from the sidebar..

Alessi: In this testimony I mistook the two –

Maxwell's lawyer: In 2016 you were directed to the name JANE and you said No

Maxwell's lawyer: Do you see the notation, new moldings in the bedrooms?

Maxwell's lawyer: And during construction, no one live in its?

Alessi: No, during part of it Mr. Epstein and Ms. Maxwell lived there.

Maxwell's lawyer: You were asked if JANE was driving and you said you never saw Jane driving a car. Those are all questions about Jane, right?

Alessi: I think so.

Now Alessi back on the stand, with Maxwell's lawyer asking about Virginia Roberts [Giuffre] at Mar-a-Lago

Maxwell's lawyer: I'm asking about what you [Alessi] said –

AUSA: We ask for the whole thing to be read.

Maxwell's lawyer: So you say, Summer, I remember, I was sweating like hell in the car waiting for Ms. Maxwell to come out of the car.

[This could take a while]

Maxwell's lawyer: Mr. Alessi, didn't you keep a Rolodex of the girls?

Alessi: No, of the massage therapists.

Maxwell's lawyer: You got referrals for massage therapists?

Maxwell's lawyer: You said, One of Jeffrey Epstein's friends would say, I got a good massage, and you'd say, please give me the answer.

Maxwell's lawyer: You previously said this under oath. May I continue your Honor?

Maxwell's lawyer: Isn't it true that Mr Epstein bought other women to the house and told you to remove the pictures of Ms. Maxwell from the house?

Alessi: I did what he told me to do.

Maxwell's lawyer: Why did you THINK you were taking Ms. Maxwell's picture down, when Mr. Epstein had the other women over?

Alessi: I have no idea.

Maxwell's lawyer: And that doesn't make you guilty of sex trafficking, does it?

Maxwell's lawyer: And when you cleaned the massage room, you have saw signs of violence, right? No one complained to your of that?

Alessi (voice rising) No but I wish they had, I would have done something.

[Programming note, as Alessi ends - some may not believe his statements that he didn't know, or especially the claim near the end of cross examination that if only the victim has complained, he would have acted. Some, it seems, found that laughable. Discretely]

The topic, we believe, will be search of Epstein's home. But first, his credential and career. This could take a while.

Parkinson: I participated in a search in Palm Beach.

AUSA Comey: What is this?

Parkinson: A map or aerial view.

AUSA: Had you been there before?

Parkinson: Yes, on a report of a theft of currency. I met Mr. Jeffrey Epstein.

Now before it gets into what was found during the search - Judge Nathan calls the lunch break; A/V will set up screens only jurors can see.

They are showing the jurors a video of the search warrant reading (and execution?) at Epstein's house. But we the Press and public can't see it.

AUSA Comey: at 1 minute, were are we?

Parkinson: In the 3 car garage

AUSA Comey: What do we see here, during the search?

[Note: while these exhibits are sealed, for some reason]

AUSA Comey is still telling the jurors to look at one seal exhibit after another, now Government Exhibit 225.

AUSA Comey: I ask that Government Exhibit 234 be admitted, under seal. Also 241, under seal.

[Finally, some exhibits not under seal.]

Parkinson: It's the Garden Room.

[There are photos spread out all over the floor, but no details can be made out.]

AUSA Comey: I'd like the jurors to look in their binders at Exhibit 255... Oh witness only. I ask that Government Exhibit 278, the master bathroom, be under seal to protect privacy [???]

Now even Judge Nathan says US has gone too far in sealing entire 39 minute video, says some portion should be made public.

[In fairness to Judge Nathan, it was the jurors who took a snacks break. The judge and lawyers stayed to argue, and now take a "comfort break."]

OK, the jurors are back from snacks break.

Parkinson: It's a bathroom with a phone and a pink, three cushion couch. And that's a portable inflatable massage table.

AUSA Comey: I ask to admit Government Exhibit 285, under seal, and "direct the jurors' attention to that writing."

Finally, Parkinson comes out of the witness box and touches Government Exhibit 51..."the green massage table."

AUSA Comey: We offer this [massage table] into evidence. I asked that the exhibit be published for the jury by setting the table up

Parkinson: Now the table is in an open position.

Exhibit 51a: Photo of massage table on its side.

AUSA Comey: Where was it manufactured?

Maxwell's lawyer Everdell: You previously investigated a burglary there, correct?

Everdell: And Mr. Epstein said that several thousand dollars had been stolen, right?

[Everdell is jumping around with his questions, laughing uncomfortably now. He asked Parkinson about an exhibit - sealed - that is Epstein's desk and the photos on it.]

And with that, without apparently landing a punch, Everdell's cross examination of Parkinson is over.

Judge Nathan: You may step down, Mr. Parkinson. You are free to take your flight.

AUSA: What were you looking for, during the search?

Dawson: Massage tables and oil. Sex toys. There were a lot of photos of nude females. We seized a phone book, a massage table, photo of a nude female, a sex toy called the torpedo

[Flashes on screen & is gone]

Maxwell's lawyer: I'm going to prove up an inconsistent statement.

[Now the questioning turns to Juan Alessi's admission of stealing from Epstein. But it's 4:59 pm. Cross examination interrupt us?]