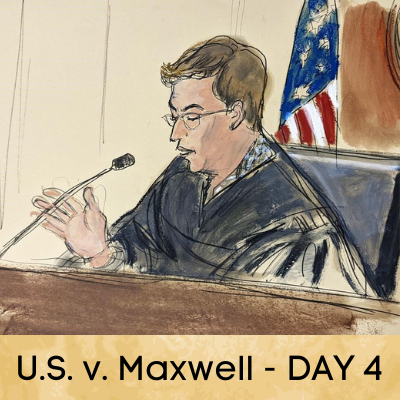 AUSA: Look at Government Exhibit 721. Do you recognize it?

AUSA: Look at Government Exhibit 721. Do you recognize it?

Kane: An enrollment application for a student.

AUSA: Don't say the name. Is it an accurate copy?

AUSA: It's a business record.

Maxwell's lawyer: Can I question the witness?

Maxwell's lawyer: The Professional Children's School doesn't verify the accuracy of the info on the form, does it?

Kane: I think they do.

Maxwell's lawyer: All of it?

Maxwell's lawyer: So the info—

AUSA: Your Honor, may I?

Judge Nathan: You may.

AUSA: What happens to info coming in?

Kane: Contact the family by phone, then invite them to tour the school and have a conversation.

AUSA: Does the School rely on the form?

[After sidebar, document is in]

AUSA: What grade was the person applying for?

AUSA: Who's listed as person of financial responsibility?

AUSA: Thanks. No further questions.

Maxwell's lawyer: You have no idea if Mr. Epstein actually paid.

Maxwell's lawyer: And for the mother, does it say unemployed?

Kane: It says self-employed. As an interior decorator.

Maxwell's lawyer: And who is the listed agent?

Judge Nathan: Just make the jurors look at it.

Maxwell's lawyer: Look the name in the corner. And the name of the prior principal. You don't have to say them for the record. No further questions.

Judge Nathan: Thank you Mr Kane. Next US witness.

It's Doctor Lisa Rocchio. "I have a Masters and PhD from U of Rhode Island."

[After long presentation of credentials, Rocchio is in as an expert.]

AUSA: Did you interview anyone in this case?

AUSA: Does your pay depend on outcome of the trial?

AUSA: What is grooming?

Rocchio: Strategies to get children into sex

Rocchio: I've seen grooming in the Boy Scouts through a special camping trip. Or jewelry, anything to make the children feel they are appreciated.

[During the Daubert hearing, before trial, Maxwell's lawyer asked, does this mean that grandparents are grooming?]

AUSA: How common is it for a child to be repeatedly abused by the same perp?

Rocchio: Very common. It's by people close to the child.

AUSA: What is a grooming environment?

Rocchio: The perp develops trust with people around the child, for example with the parents

AUSA: Are victims of child sexual abuse likely to report it to the police?

AUSA: How do they talk about it?

AUSA: What is the long term impact?

Rocchio: They are at higher risk for adverse outcomes.

Maxwell's lawyer: Doctor Rocchio, you have a $45,000 contract for this, correct?

Maxwell's lawyer: If one had a brain injury, it might be hard to remember, right?

Maxwell's lawyer: Are you familiar with confabulation?

Maxwell's lawyer: It's filling in the gaps.

Maxwell's lawyer: My grandfather liked to take me to the Bronx Zoo. Was that grooming?

Next US witness is Juan Patricio Alessi.

AUSA: Where do you come from?

AUSA: When did you move to Florida?

Alessi: Early 1984. I worked for a wealthy family in Palm Beach, I was a maintenance guy. Then I worked for Mister Jeffrey Epstein

AUSA: How did you meet Epstein?

Alessi: I was working on Mister Wexner's mother's house. [!]

AUSA: Who is in this photo?

AUSA: When Mr. Epstein was in Palm Beach, where did you sleep?

Alessi: I had a room there.

AUSA: Who else worked there?

Alessi: I brought my wife to help me. And other girls.

AUSA: How did things changed after Ms. Maxwell got involved?

Alessi: Things were less cordial. Less conversation. I was not allowed to see Mr. Epstein anymore, unless he asked me question. Ms. Maxwell said, Don't look at his eyes, "look at another part of him."

[And with that, and a blueprint of the house on the screens]

[Alessi is describing Epstein's Palm Beach home in great detail. Presumably it will become relevant in the testimony of Survivor / Witnesses 2, 3 and 4.]

Alessi: The 2d floor. That is toward Mr. Epstein's bedroom. There was a huge bathroom.

AUSA: And what's that other bathroom?

AUSA: But they both came off the master bedroom?

AUSA: Where did Ms. Maxwell sleep in the Palm Beach house?

Maxwell's lawyer: Objection! But it's allowed.

AUSA: How many times did you see females by Mr. Epstein's pool?

Alessi: 100s. AUSA: How often were they topless?

AUSA: How about Little St. James?

Alessi: I was on a cruise with my wife to St. Thomas. They picked us up & showed us Little St. James. It was huge.

AUSA: Did you visit any Ms Maxwell property?

Alessi: Her townhome in London. She invited us. It had a red front door

AUSA: What conversations did you have with Ms. Maxwell about this booklet?

Alessi: I told her I could not do this checklist, with all my other work.

AUSA: How long is this book?

AUSA: What is it?

Alessi: List of what were supposed to do to maintain the house.

[Now Maxwell's lawyer will question Alessi about the book of instructions.]

Maxwell's lawyer: When you left, you didn't have this in your possession did you?

Alessi: No I did not.

Maxwell's lawyer: But this book was created after you left, at least by the date on it

AUSA: We you recognize the address at the bottom?

AUSA: What does this instruction saw?

Alessi: "Do not discuss your personal problems with guests."

AUSA: And this one?

AUSA: There's a reference to the JE and the GM telephone directories. What were they?

Alessi: Books with hundreds and hundreds of names. Directions and addresses.

Alessi: They were 2 inches thick. Full of names.

AUSA [for some reason turning away from the 2 black books, at least for now] Let's turn to page 23, about Ms. Maxwell's desk. What does it say?

Alessi: Please the directory to the right of the phone.

Assistant US Attorney: What is this?

Alessi: Instructions for serving breakfast. Sometimes at 5 am.

AUSA: Who else worked there?

AUSA: Don't say their names. Jurors, look at the binders under your chairs. GX 12.

Alessi: Can I have a cup of water?

AUSA: Is that name the person we'll call Jane?

AUSA: When you met Jane how old was she?

Alessi: Appeared 14 or 15. She was beautiful, beautiful eyes, long brunette hair, very pleasant. Three times she was there with her mother. Then, without her mother. Many times.

AUSA: How would Jane get to the house?

Alessi: I would pick her up, and the direction of Mr. Epstein or Ms. Maxwell.

AUSA: When did you meet Ms Virginia Roberts?

Alessi: I was at Mar-A-Lago with Ms. Maxwell. I waited in the car like the driver

Alessi: It was a hot day. Ms. Maxwell said, Stop, John, Stop. I did and Ms Maxwell went up to this girl.

AUSA: Where was this girl?

Alessi: She was coming down the ramp.

AUSA: How did she look?

Alessi: Then by 5 pm I saw her [Virginia Roberts] back at the house.

AUSA: Show Exhibits 113 and 114 only to the witness and parties... How old did you think Ms Roberts was?

AUSA: Did Ms. Maxwell ever instruct you to pick up Ms. Roberts?

AUSA: Did you ever see Ms. Roberts at Mr. Epstein's home with luggage?

Alessi: Yes. I drove them to the plane.

AUSA: How many massages would Mr. Epstein get a day?

Alessi: Before I left, thee a day. I called whoever they told me to call.

AUSA: Did the phone books we discussed have names for massage in them?

AUSA: Did you see Jane's name in it?

Alessi: Yes. The books were updated twice a year.

AUSA: What did you do with them, when new ones were made?

Alessi: Just throw them away.

AUSA: I have a physical exhibit, GX 52. May I approach the witness? Do you recognize it? What is it?

Alessi: It is the directory.

AUSA: Did you review it last night?

AUSA: How many names?

AUSA: Is this the same you saw when you were that or a later version?

AUSA: Pull up Exhibit 52a. It is a sealed exhibit.

[with jury out, lawyers' arguments continue. Assistant US Attorney says "We are not offering the full exhibit 52 [the black book]. [Why not?] Now break is taken]

AUSA: How often was the directory updated?

Alessi: Twice a year. And the names of new employees were added, and those who left were taken out.

AUSA: Is Sarah Kellen in this version?

[Long sidebar, after which Maxwell's lawyer does the questioning]

Maxwell's lawyer: As you sit here today, 19 years later, you have no idea where Exhibit 52 has been?

Maxwell's lawyer: You said the book was two inches thick. But Exhibit 52 is a quarter inch thick, correct?

Maxwell's lawyer: The book you were talking about was from New York, right?

Maxwell's lawyer: And the PostIt(TM) notes weren't there, right?

Alessi: Right. But it continues:

AUSA: Did you take messages for Mr. Epstein? How?

Alessi: If he didn't want to talk the call. Or wasn't there.

Maxwell's lawyer: There are a number of pages without dates next to the names. Do you know that?

Alessi: I guess so.

AUSA: They are sealed - not to be put on screens, binders only. More more questions:

AUSA: What supplies did you buy for the massages?

AUSA: Did Ms Maxwell give you supplies?

Alessi: Exotic oils for other countries.

AUSA: Was Mr. Epstein's door open during the massages?

Alessi: Never. Afterward I went in with gloves.

Alessi: To clean up.

AUSA: What did you see after the massages? Towels?

Alessi: Yes. But not all of the massages.

AUSA: Do any incidents stand out in your mind?

AUSA Comey: What did you do with it?

Alessi: Wash it up.

Alessi: In Ms. Maxwell's bathroom. In a basket.

AUSA: How did you know where to put it?

Alessi: I knew everything going on in the house.

AUSA: What else was in the basket?

AUSA: And the other one, the massager, did the ball at the end vibrate?

Alessi: Yes. I would put it at the top of Mr. Epstein's dresser.

AUSA Comey: What photos were in the house?

AUSA: Were there photographs of naked women?

Alessi: Yes. But those were kept in Ms. Maxwell's desk.

AUSA: Why did you leave Mr Epstein's employ?

Alessi: I was sick and tired.

Alessi: Yes. About both of them.

AUSA: Were you questioned by the police after you took $6300 from Mr. Epstein?

AUSA: Were you arrested?

you are lying about testimony stating Trump was there! I know

No one has said anything about Donald Trump being there. Day 1 the pilot said he flew Donald Trump once. Which there is a record of DJT flying from FL to NY in the 90s, NOT to Little St John Island and NOT on the Lolita Express. Any other time Trump's name is brought up,, it's from name dropping. Like when they talk about their "circles" , or a photograph. Remember, once DJT found out about JE, when JE tried to pick up a minor at Mar a Lago, JE was BANNED from Mar a Lago, from then on. Trump also turned Epstein in to authorities. I will write a blog post soon with all of the details, citations, videos, flight logs, etc. AUSA is Comey's daughter. They are still desperately trying to pin things on Trump. But there is nothing. It will be fun to watch them eat crow. Do not worry. #hold the line

@Beth I hope this helps to explain the Trump angle that they're trying to desperately to push. In reality, Trump's involvement was - and will always be - on the side of the victims and the law enforcement. This post linked below should help explain Trump's noble actions. ????? https://www.uncensoredstorm.com/trumpconnection

I am so confused by the previous posts. Beth, how do you know that DJT was there?