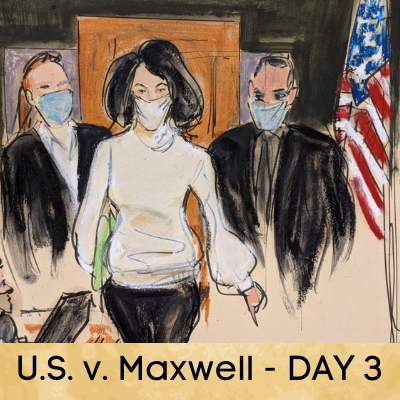 Judge Nathan: If what the defense bring in is impeachment [of the Witness] material, it's not a Rule 16 issue.

AUSA Rohrbach: It should have been disclosed; it is about a collateral matter.

[Note: these are the lawyers' arguments before the jury comes in at 9:30]

AUSA: The witness couldn't even recognize the photo, & it wasn't impeachment of what she said on the stand.

Judge Nathan: What is the US' understanding of when the witness lived in the address in the [FBI] 302?

AUSA Alison Moe: At 14 she was living in a pool house

Maxwell's lawyer: In her application to Interlochen [music school] she listed the address that he showed her yesterday.

Maxwell's lawyer Laura Menninger: She already said on the record that she lived in the same place after she met Epstein until she moved to NY

Judge Nathan: Is there anything we can discuss at [non public] sidebar, before the jury comes in?

AUSA: Some issues we can only do when they come up.

Judge Nathan: OK, then I'm going to step down for a few minutes.

Assistant US Attorney: We have an objection to tabloid articles from the Internet being introduced as evidence.

Judge Nathan: You have a general Internet objection?

AUSA: No, we'll raise them one by one.

Maxwell's lawyer Menninger: Did you turn 17 in your final year at Interlochen [art/music school]?

Menninger: Jurors, pick up the smaller binder under your chairs and turn to J-3.

Menninger: And your application said you came from a "long and loving family," right?

Jane: That's what it says.

Menninger: Do you recognize the document?

Jane: I do not recognize it per se. But I see my signature.

Menninger: It's your application to Interlochen

Menninger: When you spoke to your younger brother, you didn't mention there was a woman, correct?

Menninger: And you told a news source that you were approached by Ghislaine, no mention of Ghislaine, correct?

Jane: I don't remember that.

Menninger: When you got to Epstein's house with your mother - your house was in West Palm Beach, right?

Menninger: You didn't cross any state lines, did you?

Jane: No I didn't. There were only the 3 of us having tea.

Menninger: Have you ever spoken with your sisters about your boyfriends?

Jane: I didn't have any boyfriends...

Assistant US Attorney: Can we have a brief sidebar about this?

Maxwell's lawyer Menninger: Look at the last line in the top paragraph. You told the agents that Epstein would decide where everyone sat –

AUSA: Objection! She should only ask, Does it refresh your recollection.

Judge Nathan: Go ahead and ask.

Menninger: Does it refresh your recollection?

Menninger: And there was nothing sexual in the theater.

Menninger: Yesterday, it said it was shortly after the pool house that you had this incident with Epstein and Ghislaine, right?

Judge Nathan: Specify what you're talking about.

Menninger: This is foundational.

Menninger: You told the government you do not have a specific memory of your first time with Ghislaine –

Menninger: You have come up with the memory in the last two years?

Jane: I don't believe I have come up with memory, no.

Jane: It is not typed up right on this form.

Menninger: Another typo by the government.

Menninger went on to ask Jane if Ghislaine ever saw her perform oral sex on Epstein (no), hand job (no), intercourse (no). Note: We're not going blow-by-blow for this portion.

Menninger: Look at 39-008 at Page 5, does this refresh your recollection?

Menninger: Look at the document.

Now after 11 am break cross-examination of Victim 1 "Jane" is continuing, with Maxwell's lawyer claiming Jane has mis-remembered.

Maxwell's lawyer Menninger: You testified yesterday your first has sex with Epstein in his pool house in Florida. But you told the government it was in New York.

Jane: Those are not my notes. I did not write that down and it was not recorded.

Menninger: You told them you only remembered one incident in NY when Ghislaine was present.

Jane: I didn't understand the question

Menninger: You told the government you flew to NY with Epstein & Ghislaine to see The Lion King.

Jane: I said that but I was incorrect in my timeline. I was 14.

Menninger: You were a student of theater and the arts at the time, correct?

Judge Nathan called another break, saying that Jane needed a drink of water. Now she's back on the stand.

Menninger: Let's go to your conversation in Feb 2020, about the Lion King.

AUSA: No objection Menninger: I know Ms. Moe would like to come and do this for me

AUSA Moe: I object to that.

Menninger: But the Lion King on Broadway didn't start until you were 17 years old. Did the government or Mr. Glassman suggest to you that you might have meant the Lion King movie?

Menninger: So you recall going to the New Mexico range, a giant huge home, correct?

Menninger: And that Jeffrey Epstein's brother went with you, correct?

Menninger: You weren't asked to have sex with any of Epstein's friends, were you?

Menninger: Did Epstein introduce you to people in the arts?

Menninger: To the dean of Interlochen at a cocktail party?

Menninger: In 3509-001, you said you met Donald Trump at Mar-a-Lago, before the pool house incident.

Menninger: You said Epstein took you in a dark green car to Mar-A-Lago to meeting Donald Trump?

Menninger: You also had some recollections about flying on the private plane with Epstein, right?

Menninger: You said you were asked your weight when you got on the plane, correct?

Menninger: In 2019 before Epstein was arrested you were contacted by the government, right?

Menninger: But you said you were not interested in getting involved.

Menninger: Then you hired Mr Glassman, a personal injury lawyer with ads-

Menninger: Did you see his ads, touting his big verdicts?

Jane: He's a friend of a friend.

Menninger: Is this your contingent fee agreement?

[Programming note: It seems "Matt" will be the next witness. Judge Nathan has said there is some issue with the jurors' delivered lunches. So this may go a while.]

Menninger: When you were 15 did you take a trip to Italy for a singing competition?

Menninger: And at 16, you traveled for a sibling?

Menninger: And you were in a beauty pageant sponsored by Donald Trump?

Menninger: Do you recall crying that Jeffrey Epstein only gave you $2000 for a dress?

Menninger: You were on a reality TV show with Matt, right?

Menninger: And there was tension and you cried?

Menninger: You claimed you were putting a roof over your family's head?

Jane: I don't know if I used those words.

Q: You told that to Matt.

A: They were living in my house.

Menninger: And you demanded money from Ghislaine Maxwell?

Jane: I have a lawyer.

Menninger: And you sought money from the Epstein Compensation Fund - look at Exhibit J-18, at 6. You were offered how much?

Judge Nathan: We'll break for lunch, jurors. I hope all of your lunches are back there now.

Menninger: So you went to a specialized entertainment school, right?

Menninger: And since then you've played roles like cancer patient?

Menninger: You can cry on command?

Menninger: You're accusations in this case include that you were 14 went you were abused, right?

Menninger: But you first told the government you were 13, right?

[Note: on "prostitute," Jane said "Not my favorite role."]

Menninger: You talk about the Lion King and say you were 14 - but it only came out when you were 17, right? And you said you were 15 when you met Mike Wallace, at his 80th birthday party, right?

Menninger: You don't know when his birthday is? Look at J-33, does it refresh your recollection?

Menninger: In your civil case you got interrogatories, do you know what those are?

Menninger: So your lawyer answered for you under your oath and you didn't know?

Cross examination of Jane peters out, with a final exhibit admitted. Unclear how press and public will get it.

AUSA: Did any of us prosecutors ever tell you what to say at this trial?

AUSA: You were asked about notes of meetings with the US. Did you speak about everything all at once?

Jane: No. It was too difficult, emotionally, on every level.

AUSA: Then there were fewer of us in the room. Do you know why?

Jane: To make me more comfortable.

AUSA: Why did you speak to the tabloid reporter?

Jane: He basically blackmailed me. He said he would publish unredacted documents.

Judge Nathan: This is not for the truth of the matter asserted, but impact on the listener.

AUSA: Did you make an agreement with the reporter?

Jane: Yes. I'd talk about meeting Jeffrey Epstein, the reporter would keep my name out of it. I was working on a TV show.

AUSA: Do you know the difference between acting on television and testifying in court?

Jane: Yes. This is real. I am seeking closure. I have been running from this my entire life. I want to help in whatever way I can. And maybe find some healing.

[By the end, Jane is sobbing.]

AUSA: Do you have any financial interest in this trial?

Judge Nathan: Jane, you may step down. And we'll take a break. Jurors, your snacks are here.

AUSA Moe: How do you know Jane?

AUSA: Did you live together?

AUSA: Are you still friends?

Matt: Yes. And we work on the same TV show.

AUSA: What did Jane tell you about her home life?

AUSA Moe: Did Jane speak about her family finance when she grew up?

Matt: Yes. That when her father got sick, they went broke. The mother was working a small job. They were in the same bed.

Matt: They she told me she had a godfather. Later she told me it was Jeffrey Epstein. I said, He helped pay your bills? She said Yes.

AUSA: When did she tell you she met Epstein?

AUSA Moe: Did Jane tell you what happened between her and Jeffrey Epstein?

AUSA Moe: Did she say why he gave her money?

Matt: She just said, It was not free.

AUSA Moe: Did they tell you about a women who was involved?

AUSA: Did she give the woman's name?

AUSA: What was her demeanor like when Jane told you about Jeffrey Epstein?

AUSA: What did Jane tell her mother?

Matt: That the money was not free. That –

Matt: Jane told her mother that the money was not free and that it should not have been allowed.

AUSA Moe: Did you learn Ghislaine Maxwell was arrested.

Matt: Yes. On the news. I asked Jane, is that the woman you told me about? And she said Yes.

Then Maxwell's lawyer: No cross [!]

Next witness: Daniel Vesselsen of Interlochen

AUSA: Where is Interlochen, Michigan.

AUSA: How do you keep fundraising records?

Vesselsen: A letter to Mr. Epstein about the scholarship lodge, how much he'd give

[Note: It was definitely time for a name change]

And with that, Vesselsen is done.