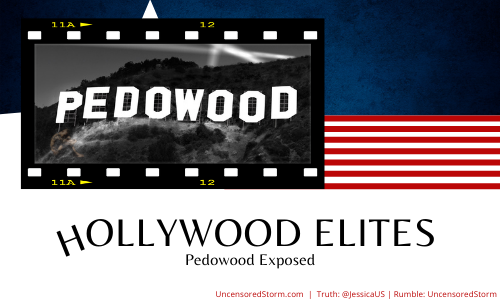 Out of Shadows (Full Documentary)

The 'Out of Shadows' Documentary is an exposé on how Hollywood and the mainstream media manipulate the multitudes by spreading propaganda throughout their content, as told by director and star, Mike Smith, with Kevin Shipp, Brad Martin, Liz Crokin

Sean Stone (son of Oliver Stone) new docuseries on Human trafficking, pedophilia, 'Satanic' politics... The Jeffrey Epstein scandal was the tip of the iceberg as Sean Stone, the former host of Buzzsaw, lays out the hidden agenda of the dark elite in this six-part documentary series. In this 'red pill' journey, Stone explores famous cases like the Franklin Scandal, MK-Ultra and Monarch programming, the Jon Benet Ramsey murder and even the Son of Sam case, to connect the dots of a dangerous ideology, now driving the philosophy of a 'transhumanist' idea - to remake the human being. As more and more people awaken to this hidden agenda, the more rapidly we can take our power back.

Hollywood on Notice: Save the Children

We see them as celebrities, but they're really puppets to distract us with entertainment and manipulate the masses. It's widely known that Hollywood works hand in hand with CIA to funnel damaging propaganda.  Watch this Documentary that exposes Hollywood, the CIA, and Illuminati.

Horned Masks, Illuminati Balls hosted by the Rothschilds family, look like scenes from a movie.  'Eyes Wide Shut', to be specific.

Eyes Wide Shut is about a Manhattan doctor who embarks on a bizarre, night-long odyssey after his wife's admission of unfulfilled longing.  The movie is described as a "mystery" and "thriller" by IMBD, and is directed by Stanley Kubrick.  Tom Cruise, Nicole Kidman, and Todd Field star in the movie that was inspired by "Traumovelle"; another film with sexualized occult masquerade balls, in a psychological thriller.

Was Stanley Kubrick trying to expose these satanic rituals held at Rothschilds' illuminati events?  And did these gathering inspire him to replicate in the movie "Eyes Wide Shut"? Stanley Kubrick died shortly after showing his film to the studio. Many believe he was killed because he refused to cut 24-minute scene. The scene included cannibalism, human sacrifice, and ancient luciferin rituals from the movie.

13 years for Britney Spears, in her own words

YouTube has scrubbed this video of the Britney Spears testimony, after receiving millions of views, citing a copyright claim by the LA Superior Court. Britney made it clear in her statement that she wanted her testimony to be public. The media, Big Tech & the state of California continue to collude against Britney & her supporters all while enabling her traffickers & the many crimes they committed against her.

Documentary of Britney Spears Conservatorship aka Trafficking, Fraud, Abuse.  You may not realize that Britney Spears has been legally controlled by her father, her manager, and the state of California, against her will, all while being paid for by her own estate. Republican Matt Gaetz accused Congress to was first bring up the #FreeBritney movement in #Congress. He was then was immediately accused - with no accuser. The case ended in the indictment of the accuser.  VP Kamala Harris, as California Attorney General, refused to take action to remove her from conservatorship.