Posted by [US] on 3/3/2022 to Biden Crime Family
Updated 4.16.22
New Evidence of US Funded Biolabs and Connections to Biden Family and Ukraine
Ukrainian Resident's point of view on the American mainstream media lies and hypocrisy.
Posted 3.3.22
Ukraine is happening for a reason, and it's not what mainstream media wants you to think.
Ukraine Investigators Confirm Joe Biden Corruption in Press Conference, and Show the Receipts!
Watch the Full Ukraine Press Conference from December 2020:
During the Ukraine press conference in December 2020, the investigators announce that they have been "sanctioned by politicians from the US Department of the Treasury under the request from Democratic senators.  They really didn't want us to publish what we are going to publish today."  He continues, asking for "documents, material evidence, and billions of dollars to be returned to Ukrainian citizens."
In this press conference, investigators present proof that Joe Biden and Hunter Biden laundered money via Burisma.
"Burisma belongs to the fugitive Yanukovych-era minister Mykola Zlochevsky.  The inclusion of Biden in the Burisma leadership and payment for his services is nothing more than a political cover that protected Zlochevsky from the Ukrainian law, namely from the criminal code."
(screenshot from full press conference video below)
The investigators also present recordings of conversations between former Ukrainian President Pedro Poroshenko and US Vice President Joe Biden, corruption schemes involving the "highest officials in Ukraine and the United States", related to the procurement of coal and gas, and embezzlement of hundreds of thousands of dollars from the US to "deliberate sabotage of the Prosecutor General's Office of Ukraine"
"After a series of press conferences, our group of investigators, namely the senior prosecutor of the group of prosecutors of the Prosecutor General's Office of Ukraine for investigating the economic crimes of the Yanukovych regime in 2016-2019, was approached by two foreign citizens.  They were directly involved in laundering millions of dollars stolen by Zlochevsky from Ukrainians with the subsequent withdrawal of these millions to accounts of Burisma, and further withdrawal to the accounts of the company belonging to Bidens."
"Witness 1" testifies that an strange recurring (US dollar) amount of $83,333.33 was being transferred from Burisma Holding LTD to Rosemont Seneca Bohai LLC, between November 2014 and October 2015
Side Note: Rosemont Seneca Bohai LLC was managed by Devon Archer, who was just sentenced to prison for his role in this fraud.
Below is just one page of the Morgan Stanley client statement.  This government exhibit 301, shows Rosemont Seneca Bohai bank records listing payments from Burisma to Hunter Biden 2014-2016.
Full 260-pg  document HERE.
This is how the scheme of theft of money and their transfer through offshore companies to Biden's companies looks like: 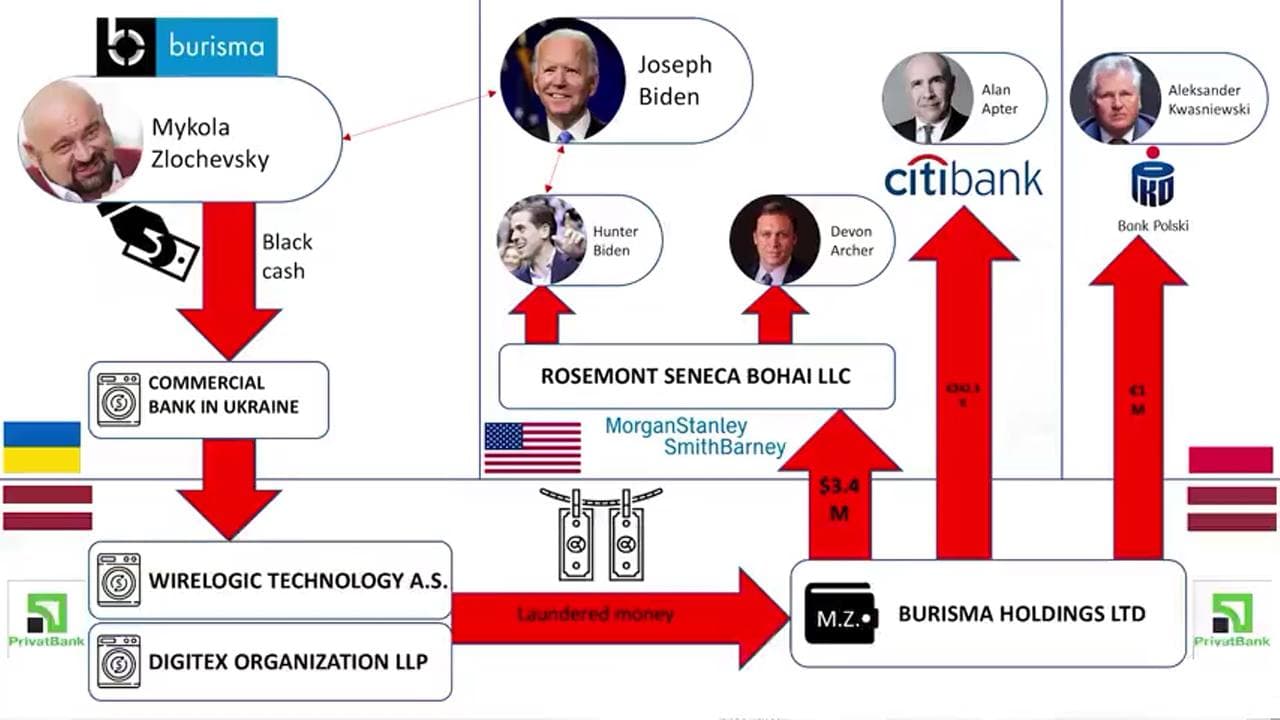 As stated in the Press Conference, information about the 'DemoCorruption' was posted on NABU-leaks website.
"When the Prosecutor General's Office, headed by Viktor Shokin, initiated criminal proceedings against Burisma, and in relation to the theft of money from Ukranians.   They got close to Biden so tightly that in order to save the fee from Zlochevsky, he promised Poroshenko 1 billion dollar loan guarantees.  For the sake of his own profit, Biden disposed of someone else's 1 billion dollars, which Poroshenko gladly accepted and used through his Bogdan Corporation and Kuznya On Rybalsku Plant.  And in return, he fired Shokin.  The second threat to Biden came after the US presidential election and his departure as Vice President."
... And about the Ukraine Prosecutor that Biden bragged about controlling...
In 2019,Ukraine Prosecutor Lutsenko revealing that the US Ambassador gave him a list of people not to persecute back in 2016.
It turns out the group that Ukrainian law enforcement was probing was co-funded by the Obama administration and liberal mega-donor George Soros. I wonder if this is the guy who filled the prosecuter position that Joe Biden famously had fired...?  Source
[video link]
<
https://nypost.com/2022/02/28/devon-archer-sentenced-for-role-in-hunter-biden-fraud-scheme
https://www.documentcloud.org/documents/6003585-Rosemont-Seneca-Bohai-Bank-Records-Listing.html
https://nabu-leaks.org/statement-of-a-criminal-offence-under-art-214-of-the-criminal-procedure-code-of-ukraine
https://rumble.com/veb7k5-joe-ukraine-press-conference-mentions-biden-crime-family.html
https://rumble.com/ve3y1n-leaked-biden-poroshenko-phone-calls-during-trumps-transition.html
https://thehill.com/opinion/campaign/435906-us-embassy-pressed-ukraine-to-drop-probe-of-george-soros-group-during-2016?amp