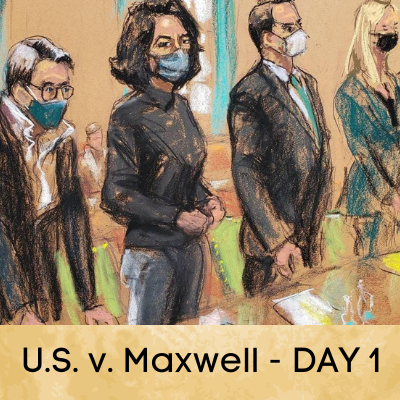 Ghislaine Maxwell has been taking notes at far side of the defense table, next to the marble wall. Now Assistant US Attorney Lara Pomerantz is getting set in the glassed-in COVID podium, as the jurors come in. It's on.

Judge Nathan signs the praises of the overflow courtrooms; no mention of the denial of public call-in line such as exists, right this moment, in DDC, and these days by other SDNY judges.

I want to tell you about Jane. She turned 14 years old that summer when a man and a woman walked by. The man said he was a donor who gave scholarships to students at this camp. The woman asked for her phone number. It began a nightmare.

The man and woman were predators. Jane was not their only victim. There were other young girls. Who was that woman? It was the defendant, Ghislaine Maxwell. The defendant took these girls on shopping trips and won their trust. She talked sex

There were times she was in the room when it happened. That is why we are here today. Between 1994 and 2004 the defendant sexually exploited young girls. She preyed on them and served them up to be sexually abused. She was trafficking kids for sex

He owned a ranch in New Mexico, an apartment in Paris, a mansion in Manhattan, Palm Beach, a private island. Epstein has private planes and pilots. The defendant got to enjoy that luxury right along with Epstein.

The defendant was the lady of the house. She imposed rules. Employees were to hear nothing, see nothing, say nothing. There was a culture of silence. That was by design. The defendant's design.

They had a play book: get access, gain trust. They often targeted the daughters of single mothers, struggling to make ends meet. They made these girls feel seen. But that was a cover.

To get the girls to touch Epstein, they used the cover of massage. The defendant massaged Epstein then told the girls to do it. Epstein brought girls into his massage room every single day. It was sexual abuse.

Before I describe those so-called massages, let me say: these are the facts. Epstein touched the teenage girls with equipment... He sometimes penetrated... The defendant helped Epstein find those girls, for so-called massages.

They lured their victims with a promise of a brighter future then destroyed their lives. The defendant was jet-setting in private planes.

[Note: And holding press conferences at the UN, getting Antonio Guterres' official Amir Dossal on her board]

So what happened to Jane? You will hear from her. Someone from Epstein's office invited her to Epstein's house. He told her mother he was offering a scholarship. Jane was 14 - a kid. Epstein was in his early 40s, the defendant in her early 30s

The defendant told the girl she was going to give her a massage. But she touched her elsewhere. The girl was 16 years old. There's a 17 year old, spotted in a parking lot. The driver pulled over.

[Note: Maxwell puts on her glasses and jots down notes]

They moved beyond scholarships and moved on to a pyramid scheme of abuse. They encouraged girls to bring other girls, for extra cash. The defendant knew exactly what she was doing. That's what we expect the evidence will show.

[Note: What about UNindicted co-conspirators?]

At the end we will speak again. Until then, pay attention, follow Judge Nathan's instructions, & use your common sense. You will reach the only verdict possible: that Ghislaine Maxwell is guilty.

Ever since Eve, women have been blamed for the evil deeds of men. Ghislaine Maxwell is not Jeffrey Epstein or any of the other men, moguls and media giants who abuse women.

Epstein will be mentioned throughout the trial. He is the elephant in the room. He is consuming this entire courtroom and the overflow courtrooms. You are not here to judge Epstein. You are here to determine if Ghislaine Maxwell committed these crimes

We are proud to represent Ghislaine Maxwell, me and Christian Everdell, Laura Minninger & Jeffrey Pagliuca [pronounced like "Lasagna," G silent]

These witnesses want a jackpot of money. There are 4 accusers. They'll say Ghislaine groomed them

[Note: Get ready for expert Elizabeth Loftus, who also testified for Harvey Weinstein and others]

Jeffrey showed only what he wanted to show.

The Epstein Victims Fund did not test the claimants' stories. They got millions of dollars. Ghislaine Maxwell is on trial because of her association with Epstein. She is a scapegoat -- AUSA: Objection! Judge Nathan: As stated, overruled.

Ghislaine is a stand-in for a man who behaved badly--

Judge Nathan: Let me hear from counsel at the sidebar.

[Sternheim returns from the sidebar]

"Ghislaine Maxwell can pilot a helicopter. Her life of luxury is not a crime. You all said you would not be biased by affluence or opulence and your word is your bond.

Epstein had made positive traits. Attractiveness. He radiated what's called a halo effect. Ghislaine became his employee, to administer his real estate like small boutique hotels. Like many New Yorkers, he wintered in Palm Beach.

Houses require upkeep. Epstein spent time with other women and traveled with them without Ghislaine. The jets were like a Hamptons Jitney in the air. Very interesting people on them: politicians, celebrities, even a former astronaut who became a Senator

There will be Jane, Annie, Kate and Carol. They will tell their stories only from memory. But memory, as you will here, changes.

Consider the incentive of personal monetary gain. These women were not initial interviewed by investigators with experience –

Sternheim: You decide if they are credible.

Epstein was a manipulator. He had no children. He had no boss. But he attracted these rich and famous people. Before his fall from grace. He was a 21st Century James Bond. His mystery has stirred interest and his accusers have shaken the money tree

Epstein traveled with an entourage but kept parts of his life locked up. Other manipulators? Lawyers, media & money have impacted the memories you'll hear. Civil lawyers targeted clients and primed them.

[Another whispered sidebar. Maxwell drinks from a water bottle, straighten her glasses: she does not go up to the bench with Sternheim]

[In the 2d row: new US Attorney Damian Williams, being whispered to by senior AUSA Tom McKay]

For people to receive money from the Epstein Fund, they receive more if they cooperate with the government. These witnesses have gotten money, lots of money.

The Epstein Fund has many of the same administrators as the 9/11 fund. But for 9/11, there was hard proof. Let's talk about Jane. Yes, she was and is a talented singer and Epstein, a patron of the arts and a supporter of young talent, sponsored her

After Epstein died, when money was on the line, Jane hired a lawyer and became a client, they got in touch with the government because it would help with her monetary claim,

Jane is now on a soap opera. She got $5 million from the Epstein fund. Consider that. And this, about Annie - her sister is an artist. She came to NY when she was 16 and met Epstein. Ghislaine was not in the country.

[Long sidebar. US Attorney Damian Williams has left the courtroom.]

Annie will tell you she stopped writing in her diary before the events in NM. Annie is a 41 year old psycho-therapist who only met Ghislaine once, in NM. She promotes herself as a victim

She will say she's scarred. But why did she keep the boots Epstein gave her? They are well worn. She was awarded $1.5 million. Let's talk about Kate. She has admitted she is ambitious. She was involved with an older British gentleman.

She eagerly spent time with Epstein. Her emails to Epstein continued a relationship with him for over a decade. When he was in jail she sent him pictures of herself. Kate is a 44 year old former actress and socialite from the UK.

She came on an entertainment visa but she is no longer in the entertainment field. She got $3.25 million. She is also seeking assistance from the government to help her get a visa, a special visa for US witnesses.

The last accuser -- she had a dangerous lifestyle, using drugs. This is 2002. Carolyn was introduced to Epstein by Virginia Roberts, who was paid to recruit for massages. This is for the trafficking charges 5 and 6. This had nothing to do with Ghislaine

She sued Epstein and his assistant, but not Ghislaine. Ghislaine had not come up in the interview in 2007. It was Carolyn who groomed and trafficked for Epstein. But when he died, her story changed to include Ghislaine. She got $3.5 million minus $40k

The government is trying to stitch together four different story. But the only common denominator is they got big payouts. These are paper cut-outs. The charges are not supported.

Jeffrey Epstein is not here. Ghislaine is here. You have the power - find Ghislaine not guilty

Judge Nathan: Thanks. 10 minute break then 1st US witness.

Nickname: Larry. "I am an airplane pilot."

AUSA Comey: Who did you work for?

AUSA Comey: Where did Epstein hire you?

Visoski: Same duration as myself.

AUSA Comey: What was Ms Maxwell's hairstyle in those days?

Visoski: She changed it a lot, "like most women." [Some groans]

AUSA Comey: Can you identify Ms. Maxwell, if you see her in the courtroom, by a piece of clothing?

Visoski: She's in the corner, in the white sweater and the dark hair.

AUSA Comey: Let the record reflect, the witness has identified the defendant.

Visoski: The only time Epstein didn't take a private jet was when the Concorde was flying. Ms. Maxwell used airlines sometimes. In the late 1990s she had an option on a quarter share of a private jet. For a domestic flight, I didn't need to know who was flying in my plane.

AUSA Comey: So you didn't get all the names?

Visoski: I did not. There was NYC, Palm Beach, Santa Fe- actually Stanley NM - an apartment in Paris & an island in St. Thomas

AUSA Comey: Can you describe the interior of Mr. Epstein's Palm Beach residence?

AUSA Comey: Who drove Mr. Epstein up to this plane?

Visoski: Juan comes to mind. But others too.

AUSA Comey: And in NY?

AUSA Comey: And what did you do at 9 East 71st Street?

AUSA Comey: Which airport did you use?

Visoski: Teterboro. Then Newark or JFK with the larger plane.

It seems as if the government is doing everything to protect itself because the government is guilty of interacting with the young girls (now women). I truly feel having Commy involved is a huge shot in the arm of the American people. We are not blind to what is happening. A huge cover-up by the Democrats.